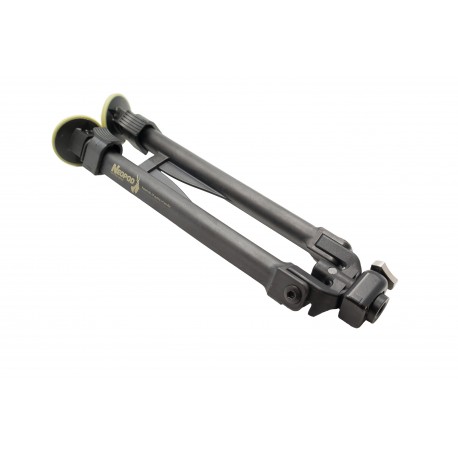 Notify me when available

It was time to re-think the bipod. We did, and the result is the NeoPod. Itismadefrom carbon fibre reinforced PEEK polymer. This material has a tensile strength equal to that of stainless steel – with only half the weight of aluminium.

For hunters going to extremes, from the deepest deserts to the highest mountains, there are two key things to consider when choosing the right equipment: weight and strength. These considerations have always caused conflicting demands in terms of design and materials. Until now, bipods have been too heavy and too bulky.

Hitting your target with the first shot is what it’s all about. A hunting bipod must be quick to deploy and help you achieve maximum precision in the field. We have used the highest performing materials in the world and refined our design through extensive testing to produce a unique bipod for the most demanding hunters.

Thanks to using space-age materials the bipod itself weighs only 90g (3,2oz). The various adapters weigh from to 7 to 31g. Total weight is only about that of 4-5 rounds of .308 Win! The material used, carbon fiber reinforced PEEK polymer is immensely strong and generally regarded as the highest performing material in the world.

The legs folds flat under the gun. No legs sticking out or metal parts digging into your shoulder. Safely leave the bipod mounted to the gun knowing that the legs deploy in a split second .

The tension knob controls the stiffness of the canting movement, resulting in a rock-steady shooting support. The complete NeoPod ultralight bipod with this cant lock weighs only 90 grams!

Made from titanium and aircraft-grade aluminium for maximum strength and minimum weight.

SOLD WITHOUT ADAPTER , TO ORDER ACCORDING THE GUNS TYPE

No customer reviews for the moment.